John and Maryum McKee moved from Roxy Ann Butte to Logtown, where their third child Martha Jane was born on Valentines Day 1855. The settlement was named after Frank Logg, a prominent miner and land owner. John eventually owned the land east of Poormans Creek from today’s Longanecker Road to the south end of Logtown Cemetery.

Logtown had blacksmiths like John, hoteliers like the Hinkles, and stores and saloons to serve the placer miners who were scouring Poormans and Jackass (aka Forest) Creeks. One enterprising Nova Scotian, Daniel Hopkins, built or acquired several sawmills in the area. He married the McKee’s daughter Sarah in 1876 and died in a sawmill accident in 1879. Sarah then married David King, son of Elizabeth Pence. This was the first of several marriages to tie the McKee and Pence families.

At least 25 of the people buried at Logtown Cemetery were early pioneers, like the McKees, who crossed the Oregon and Applegate Trails in wagon trains. Many more were first-generation Oregonians, the children of those immigrants. John and Maryum would ultimately have 14 children; all but those in italics rest at Logtown Cemetery:

marker at Logtown Cemetery in the 1960s.
The monument was misleading; Maryum may have planted the rose cutting she brought from Missouri at Roxy Ann in 1853, but the rose at Logtown was planted in 1855. The marker was hit by a car and destroyed in the 1970s. Cuttings from the Logtown Rose still thrive throughout Applegate Valley. 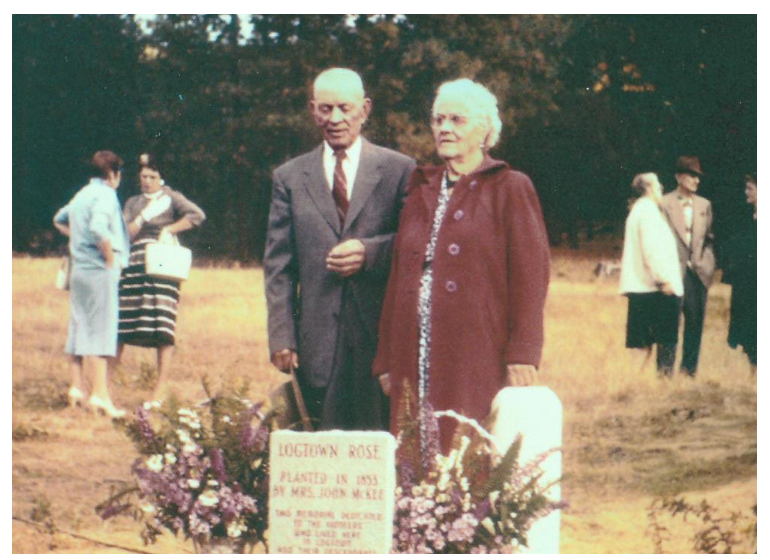