The first occupants of this valley were Dakubetede who lived in villages along the Little Applegate River, with a permanent camp at the mouth of Sterling Creek.  These Native Americans were still using the area for seasonal fishing and food gathering in the early 1850s when gold-seekers starting flooding in.

The placer claims played out in the 1860s.  White owners were eager to sell to the Chinese, who worked more diligently to eke out remaining riches.  This deed is an example:

Know all men by these presents, that I, John A. Wilson, have this day bargained, sold and delivered to Jin Lin and Co., for the sum of nine hundred dollars, the following described property, to wit:  one ranch, known as the Wilson Ranch at Bunkum with the house and fixtures and all improvements on the same.  Also the field up the Gulch known as the Horse Pasture.  Also all my mining claims at Bunkum with all the flumes and sluices and the tools to said claims.  Also my ditch known as the Wilson Ditch except one sluice head belonging to Phillips.

Yes, “Jin Lin” is the same Gin Lin who mined Robert Cameron’s property and who we’ll cover in more detail at the Gin Lin Interpretive Trail. 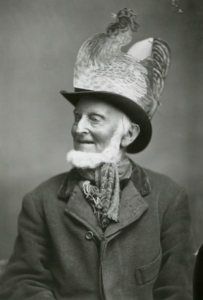 Samuel came to Jackson County from Illinois in 1850.  We don’t know why he was wearing a rooster hat in this portrait by Peter Britt!  Samuel was blind in one eye.  In 1883, neighbor Joseph Goldsby poked out the other eye in a scuffle and was sentenced to a year in the state penetentary, but was pardoned and released early.  Samuel traveled to San Francisco to see if an “ocular specialist” could repair the newly injured eye.  The doctor could not – but was able to restore sight in the other eye that had been blind for decades!

Samuel received the patent to his 173-acre homestead that included Buncom in 1871.  Son Charles Raymond “Ramey” was born here in 1875.  Ramey married Edna Tressa McKee, granddaughter of John and Maryum.  We’ll point out the places they and their offspring ranched as we progress along the History Trail. 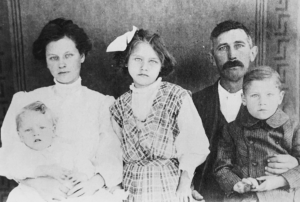 The three buildings now at the Buncom intersection were moved from their original locations in the 1940s.  The original 1896 post office was based in Samuel’s two-story home south of Little Applegate Road, where Ramey was born.  That building burned in 1917 and was replaced with the one-room board-and-batten store that symbolizes Buncom today.

The bunkhouse and cookhouse are from the Federal Mine which operated near the mouth of Sterling Creek. 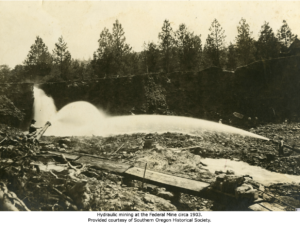 Hydraulic mining at the Federal Mine circa 1903.

The land and structures at Buncom are privately owned.  You can learn more about the Buncom Day celebration in late May and ongoing efforts to preserve this reinvented place at www.buncom.org.